It's been a while but I feel like what I posted on social media today was worth repeating.  Especially when I realized that not all my friends & family are on Facebook or Instagram...

So, I came over here and dusted off the cobwebs, stretched my fingers, and dived in.

When Oliver entered this world, he really had a great shaped head. To the point where people would compliment his head to me and asked if I had a c-section and shocked to hear I didn't.

As Oliver grew he started developing a flat spot on the back of his head.

My sister and even a colleague would say things when I showed off photos of my son.
"Does he always look that way?" "Try to get him to look the other way."

I didn't even notice it much until they said something and I looked back at the hundreds of photos I took of him in that day.

Here are a few examples: 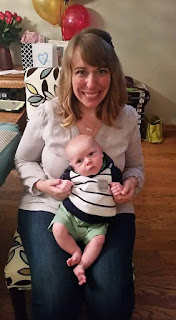 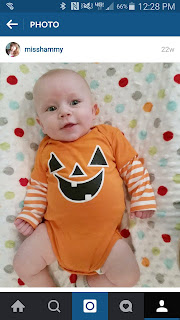 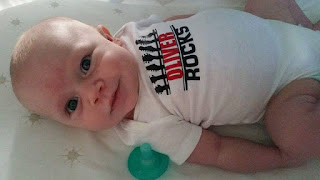 I started to become obsessive over his spot; stressing over getting him to look the other way, doing stretches, engaging him in more tummy time.

At his four month checkup, the nurse didn't think his spot was extreme. She gave me a referral though in case I wanted to take him anyway.

I already over exaggerate at times, and other people didn't think it was a big deal,
so I decided to wait to see if it would start to correct itself.

At his six month checkup, there has been slight improvement that I saw.  But when the nurse saw it, she highly recommended I now take him to the consultation.

The mere thought of Oliver in a helmet upset me so much.

What if he's uncomfortable?
What if he sweats profusely?
Does he really have to wear it while he sleeps?
What do I do if people stare?

We went to the consultation at Cranial Technologies and I was amazed by the technology they had.  The images of Oliver are shown here: 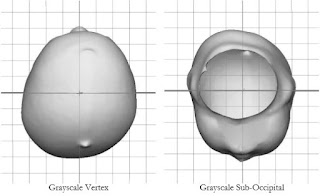 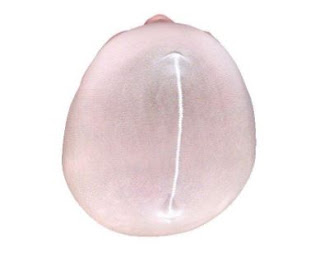 Oliver was diagnosed with plagiocephaly, which is a fancy word for a flat spot.

The head shapes for the first two years of life, so our window was small, and if we waited longer, he'd be in the helmet longer, due to the growth of the head slowing down.

They considered him moderate and did recommend treatment.

I knew this would happen and it devastated me.  I felt as if I should be blamed.  I felt as if I ruined his shape by not doing enough tummy time.  And, here I was adding another chore for myself - Washing the helmet daily, alongside exclusively pumping, prepping bottles, and making baby purees.

However, studies show that it starts in the uterus. And, the whole "sleep on their back" to try to prevent SIDS, along with the car seat, rock n play, crib, and bouncer, they are laying on their heads excessively.

I much rather be in this situation than losing him to SIDS.
SIDS still terrifies me, but not as much as when he was younger.

When we picked up the helmet, I was excited to fix this now, but I was extremely embarrassed, too.  In fact, I didn't want to share it with social media, or anyone for that matter.
I kept thinking, "How can I keep this a secret?"  It was so silly of me.

Posted by Adrienne at 5:50 AM No comments: